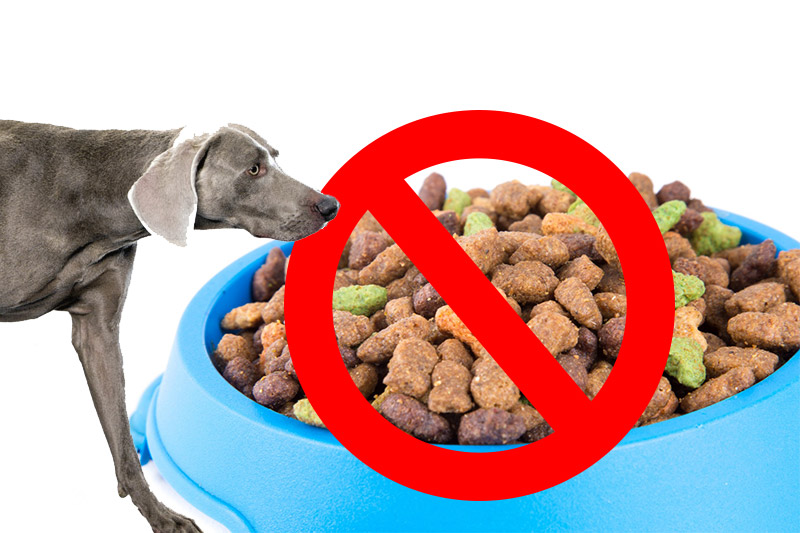 Some types of food, which are suitable for humans and even other animals, may pose a risk to Weimaraner dog because of its metabolism, which is much different from ours. Some foods cause digestive problems, while others may cause serious illness, even death.

What Weimaraners Should Never Eat? Below is a short list of foods that should not be used in the diet of Weimaraner’s dogs. This list, of course, is not complete, because listing all that the Weimaraner dog does not have to eat requires much more space. This list also applies to other dog breeds.

Many pets are unaware of the dangers they are exposed to when they feed them so-called food for humans. Providing special care is one of the usual ways of showing love and affection for a pet.

Giving the remnants of human meals or other foods for people, in the food that a dog needs to eat, is believed to increase the consumption of a pet in the food. But some of the food people take may not be suitable for our dog and should not be given at all. Although many food owners are very nutritious, well-balanced, healthy foods, it should be kept in mind that the nutritional needs of the dog are not the same as human beings. Therefore, it is clear that healthy food for men and healthy nutrition for dogs is two different types of food.

How to prevent itching in dogs caused by food

In addition, most owners only add selected residues from their meals in a pet food container, such as fats and residues of meat, while neglecting the provision of vegetables and cereals. The remnants of meals that end up in the dog’s bowl can be very tasty and the dog can love them a lot, but they do not provide a balanced diet.

Pets can only choose some waste and leave everything else that causes further and greater imbalance of nutrients in their diet. Some owners believe that their dogs, as they are naturally carnivores, should eat mainly meat. However, the exclusive muscle tissue in the food can not provide a complete food for the dog. It has a high percentage of proteins, while it is poor in calcium, iron, copper, iodine, and several vitamins, but is rich in phosphorus.

It is true that the ancestors of the dog were fed exclusively to the flesh, but also they ate whole prey, including bones, internal organs, intestinal contents. Almost all dogs like the taste of milk. While milk and milk products are an excellent source of calcium, proteins, phosphorous, and some vitamins, intensive intake can cause diarrhea in dogs.

Milk contains sugar-lactose. Lactose requires degradation in the digestive tract with an enzyme called lactase. Some dogs can not produce as much lactase as they need to be able to absorb larger amounts of lactose in milk.

Insufficient amounts of lactose in the body results in the impossibility of integrating the amount of milk that is caught and consequently causes digestion and diarrhea.

Milk products such as cheese, butter, yogurt, contain slightly less lactose than milk. They should not be used as an additional source of calcium and proteins.

Obesity in dogs and how to treat it

Excess calcium in nutrition can contribute to the development of skeletal disorders in dogs in growth, and not as previously believed, of benefit in preventing eclampsia in females feeding puppies.

It is believed that proteins from dairy products are among the four most common allergens in dogs. Many dogs enjoy the taste of sweets. Chocolate contains methylxanthine called theobromine, which is toxic to dogs when consumed in large quantities.

Poisoning with theobromine in a dog, when it happens can be dangerous for life. Less than 100gr. cooking chocolates that eat a medium-sized dog can be fatal.

These signs usually occur 4-5 hours after the dog consumes food containing chocolate. The onset of these attacks in most of the blanks marks bad predictions and often results in death.

If a dog consumes chocolate in strictly limited small quantities, there will be no risk of poisoning with theobromine. Other harmful factors, such as tooth decay, should not be foreseen.

The Liver as food The liver is extremely poor in calcium and excessively rich in vitamin A. This can cause disorders in the bone system.

If a dog consults the liver often and in large quantities, bone deformities due to vitamin A poisoning occur gradually and can remain unheard of even for several years. Dangerous and irreversible deformities can occur and possibly diagnose often too late to be helpful.

What to do when a dog swallows a foreign object

Dog owners are often mistakenly led by a number of commonly accepted ideas that have passed through the years.

The following paragraphs should correct these false beliefs.

Belief: A dog should fast one day a week.

This may be in the hands of the owner, but there is nothing to do with the dog’s health.

Wrong belief. Ideally, a dog should eat the same food from the same vessel at the same time – just the opposite of what their owners would like!

In fact, the roads of changing the diet regime exposing the dog to digestive problems. Crevice microflora is adapted to a particular type of food and any sudden change does not give enough time to these microorganisms to adapt to new foods.

This creates an increased production of certain defective metabolites or toxins. For example, the addition of meat of indifferent quality increases the action of proteolytic microbes that create a basic pH leading to flatulence and diarrhea.

Therefore, variations in dog nutrition can be tolerated only within the range of foods of similar compost. Otherwise, when changing the diet, do this step by step for a period of one week.

Belief: Commercial food should be enhanced by adding meat

Wrong belief. Many owners become nervous when they cannot identify meat in commercial whole foods. Although some manufacturers are trying to overcome this problem by adding a source of meat ingredients in the name of the food (for example, “with chicken”, “with beef”).

It remains difficult for owners to accept the fact that this ingredient is truly the mainstay of food formulation and can be equal to the quality of meat from the butcher’s shop.

It should not be forgotten that the finished food is formulated so that it contains all the ingredients necessary for a dog for a certain age and physiological state and that it is not taken into account the possible addition of “butcher meat”.

So, if you decide to store your dog with commercial food then any additive can affect the balance of nutrients and thus negatively affect the health of the dog.

Wrong belief. In races with upright ears (for example, a German shepherd), a fall or weakening of the ear may be noticeable between the fourth and sixth months when dairy teeth fall out.

At this moment, owners of the hurry to enrich food by adding calcium and vitamin, after which they noticed a normal return of ears to their original condition. In fact, calcium and excess vitamins do not have an effect because the ears are made of cartilage which of course can not fix calcium or form in the bone.

There are no scientific studies that show that a particular diet affects the position and wear of the ears so that the practice of adding excess calcium can only damage the puppy as it leads to disturbance of the nutrient balance in the dog’s diet.

Belief: Vitamin D needs to be added to food for puppies

Wrong belief. Puppies require relatively low doses of vitamin D so that the requirements for this ingredient can be easily replaced by well-balanced foods. Excessive doses caused by the unnecessary addition of this vitamin can be dangerous and lead to serious bone problems.